Below are some resources for mental health support:

Ten years ago, on July 20, 2012, Stephen Barton and two friends attended a screening of “The Dark Knight Rises” at a Century 16 movie theater in Aurora and became survivors of a mass shooting that resulted in 12 deaths and 70 injured.

At the end of last year, Barton, who lives in New York, was contacted by Heather Dearman to inform him that the 7/20 Memorial Foundation, a nonprofit where she serves as CEO, would be hosting a series of events in light of the 10th year passing since the shooting.

“I’m not local to here, and so a little less, like, connected to the local network of survivors and family members. So, I’m really glad that she did reach out,” Barton said.

Barton and his wife, Sarah Barton, were among those who gathered at midnight July 20, 2022, at Aurora Water-wise Garden, located at 15151 E. Alameda Parkway, for a vigil. Dearman was the first to present, welcoming people to the 10th annual midnight vigil and reflecting on the night that changed so many lives.

“Just after midnight on July 20, 2012, the city of Aurora, my hometown, was struck by tragedy when a gunman entered the Century 16 theater with ill intent.

“Seventy people were injured, including my cousin, Ashley, who was shot and paralyzed and also miscarried. Her 6-year-old daughter, Veronica, was with her that night and was also shot,” Dearman said. “Sadly, Veronica succumbed to her injuries along with 11 other movie-goers whose lives were tragically cut short.”

Visiting the memorial: ‘A place of peace, hope and resilience’

For the first time, the vigil included a walkthrough tour of the 12 stones placed throughout the garden, the location of the memorial, that are dedicated to those killed in the shooting.

Fairy lights decorated the garden and a violinist performed as Dearman walked to each stone and shared information about the victims. Attendees followed behind her, many carrying small electric candles with them.

“We’ve never taken people through the tour of each stone before, so we didn’t know how that would work,” Dearman said after the vigil. “But, I think it was beautiful.” 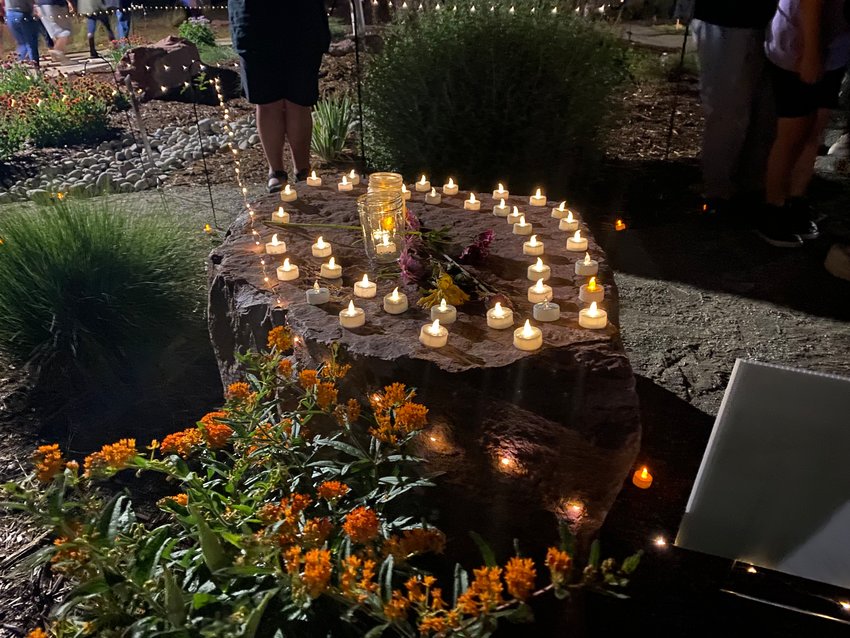 Additional candles were placed on the memorial stone for Veronica Moser-Sullivan, a 6-year-old who died in the Aurora theater shooting, in recognition of other children who have died in mass shootings, such as the Sandy Hook victims, Heather Dearman said. Image taken July 20, 2022.

In addition to the stones, a main feature of the memorial is the sculpture, “Ascentiate," which features a sculpture of 83 cranes. Tiina Marie Coon, a member of the board of directors for 7/20 Memorial Foundation and mother of a theater survivor, said there are 70 white cranes to represent those who were injured, as well as 13 clear and silver cranes to represent the souls of lost loved ones, including Ashley Moser’s unborn child.

“All of the cranes are flying from all different directions. This represents the people in the theater that came from all over the world, in all walks of life,” Coon said. “It is where they meet in the center and rise together — that’s the ascentiate.”

The motivation behind the cranes was the action of genuine kindness, she said. Following the shooting, a young boy named Nate Williams coordinated with his community to send 1,000 cranes to Aurora with messages of compassion.

“As a board, we have always felt that we wanted a non-memorial, memorial — a place of peace, hope and resilience. A place to rise above your tragedies. A place where all of the community can come and heal,” Coon said. 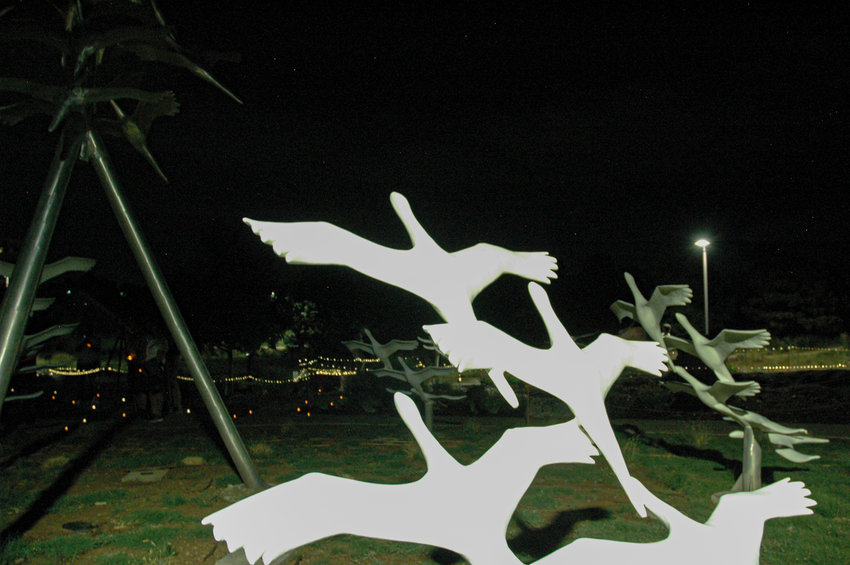 The crane sculpture, “Ascentiate,” features 83 cranes. The 70 white cranes represent those injured in the 2012 Aurora theater shooting, said Tiina Marie Coon, a member of the board of directors for 7/20 Memorial Foundation and mother of a theater survivor, on July 20, 2022. 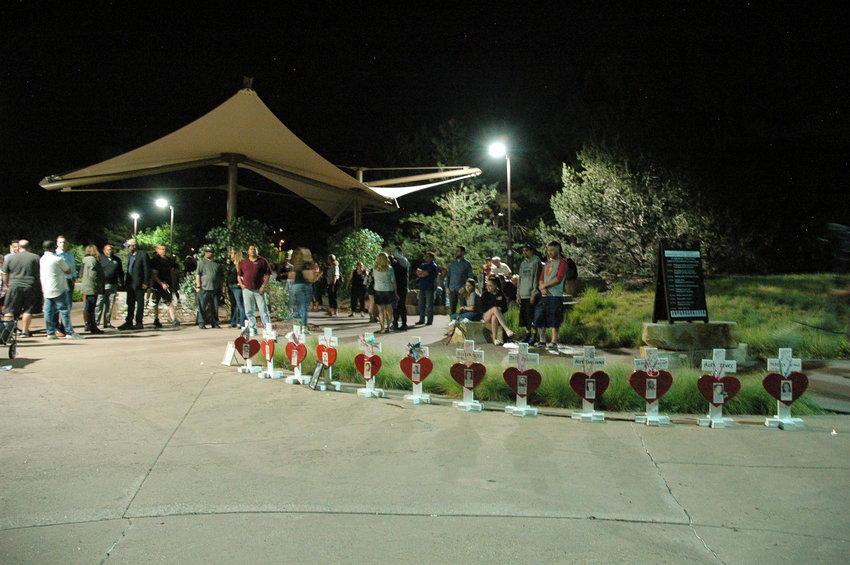 Before the midnight vigil officially began on July 20, 2022, many people gathered behind the 12 crosses that recognize those killed in the Aurora theater shooting 10 years ago.
Previous Next

Throughout the night, people cried, laughed, prayed and embraced one another. Others visited the 12 white crosses placed along the sidewalk at the entrance of the vigil.

These crosses were made following the shooting and placed across the street of the movie theater as a temporary memorial, said Jansen Young, the chief operating officer of the 7/20 Memorial Foundation. Young is a survivor of the theater shooting. Her boyfriend, Jonathan Blunk, was killed that night.

“We now place the crosses here every year. These crosses still provide a memorial and a marker for the lives lost. They are not just names on a cross. They are individuals. They are our loved ones,” Young said.

For Dearman, one of the standout moments from the vigil was the procession of first responders, called the “Hero’s Procession.” Attendees gathered and applauded on the curb of the street as first responders passed by in their vehicles.

Viki Snyder was among those clapping during the procession. Her daughter, Heather, was in the theater and was shot three times.

“We lost her five years later,” Snyder said. She said her daughter’s death wasn’t a direct result of the shooting. “She couldn’t get her head back together.”

Snyder said her daughter was smiling all the time and was everybody’s friend. “She was an amazing person,” she said.

Stephen Barton, a survivor of the shooting, reflects on that night

Stephen Barton had been traveling across the country with a friend for about six weeks when they stopped in Aurora to stay with another friend who offered to host them overnight on July 19, 2012.

“We offered, to her, to take her to the movies to thank her for hosting us,” Barton said.

Both Barton and the friend they were visiting were shot. The third friend was thankfully not shot, and all three survived, he said.

“I was shot with a shotgun,” Barton said. “And so, basically, my upper torso and my neck and face received like two dozen pieces of metal, about.”

He said the pieces of metal narrowly missed his internal organs and arteries, and he was bleeding heavily. Police did not wait for an ambulance and directly transported him to the hospital, where he was taken to surgery.

“I was just very fortunate, and I really credit them for the great job that they did that night,” Barton said about the police.

Barton still has some pieces of metal in his body today, but other than some nerve damage in his left arm and scar tissue, he mostly doesn’t have lingering injuries. His friend who was shot has also made a really good recovery, he said. 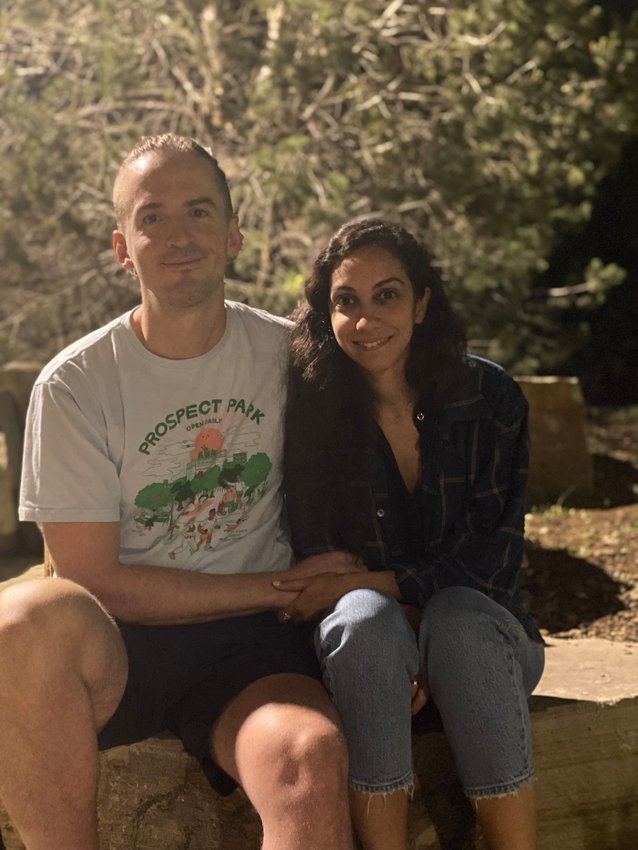 Stephen and Sarah Barton at the midnight vigil on July 20, 2022, at Aurora Water-wise Garden, located at 15151 E. Alameda Parkway.

The midnight vigil was the first time that Barton visited the memorial. He said it was hard to put into words how it felt to be at the vigil, because in some ways, it feels like what happened was in the distant past and had happened to another person.

Barton said the atmosphere casted his mind back to that “really dark and difficult time” and also showed how people have grown since then, which he said is something to celebrate.

Some good things came out of that night for Barton, he said. For example, he started a job advocating for stronger gun laws, and it was through that job that he befriended someone who later introduced him to his wife, Sarah, in 2016.

“It’s just a mix of many different feelings,” Barton said. “Because it could have just so easily gone in a different way. And being, you know, standing here and hearing the stories and seeing the crosses really drives that home.”

He said he feels really blessed and fortunate that his injuries were not more severe and that he had a strong support system. At the same time, both Barton and his wife expressed frustration about how mass shootings continue to be an issue in the U.S.

“I think that back then, in the immediate aftermath, I had more of a hope that things could change. And the last few months have kind of driven home how much work still has to be done,” he said. “And it really doesn’t feel like we’re improving or making this problem any better.”

Sarah Barton said it was wonderful to see the community gather and interact with one another during the vigil, but that it’s hard to be optimistic because "these things shouldn't happen in the first place."

Although he doesn’t live in Colorado, Barton wanted to come and attend the vigil because he thinks there is something powerful in the act of remembering, and he has a soft spot in his heart for Colorado. After walking through the memorial, he said it’s clear how much thought went into creating it, and that it’s inspiring to see so many people at the vigil who have been bonded through what happened.

“There’s no minimizing how unjust and senseless something like this is,” Barton said, calling the shooting horribly tragic. “But, I’m really glad that they’re keeping, sort of, this memory alive. And the memorial is really a beautiful physical tribute — physical manifestation — of that.”

Free legal clinic to be held at Elizabeth Library

Local news
Free legal clinic to be held at Elizabeth Library
The monthly Lawyers at the Library free legal clinic will be held at the Elizabeth Library, 651 W. Beverly St., on Tuesday, Oct. 11.
Englewood homicide suspect was neighbor of victim, heavily armed, affidavit says
The man accused of shooting and killing a woman in southwest Englewood Wednesday night was her neighbor and was heavily armed at the time of his apprehension minutes later, according to an arrest affidavit.
South Suburban unveils plans for Jackass Hill Park
The plans come after months of outreach from the parks service, which included an in-person community meeting in June and an online survey that ran for most of May.
Parker business owner charged with sex assault on child
The owner of a Parker company that offers athletic training for children has been charged with four counts of sexual assault on a child by one in a position of trust.
The Hearing Place provides Spanish speaking care
A chain of northern Colorado hearing and audiology doctors will likely sound a little better to its Spanish speaking customers with the addition of new audiologist Dr. Mariela Chavira, Chavira …

DCSD to engage community on equity policy
In a split vote, the Douglas County Board of Education directed the superintendent to compile recommendations to change the equity policy and present them in March. During the Sept. 27 meeting, …